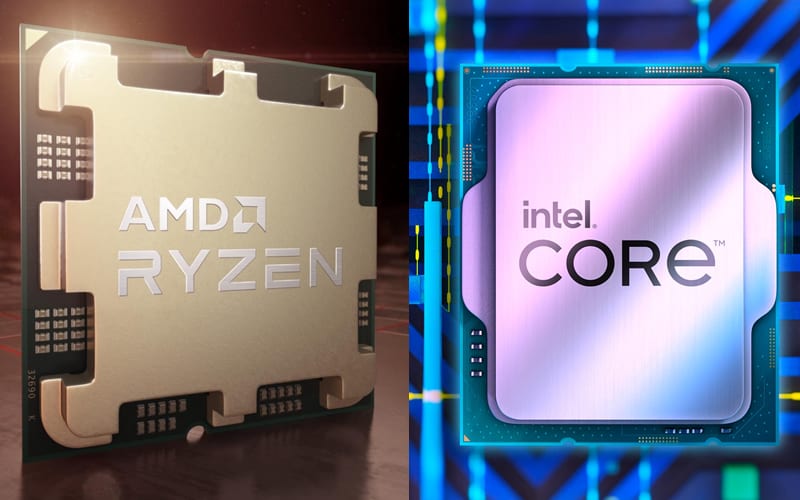 AMD and Intel are back in the CPU boxing ring yet again, each company seeking to release the best processor. AMD has announced its new Ryzen 7000 Series, based on the brand-new Zen 4 architecture and TSMC’s cutting-edge 5nm node, hoping to reclaim the performance crown it lost to Intel’s 12th-generation CPUs.

Intel has launched its 13th-gen series, codenamed Raptor Lake, which is a refinement of the 12th-gen. It features more cores and more L2 cache than before. The strategies each company is using could not be more different. Now that the reviews are in, we can finally conclude which CPUs win this generation.

The Ryzen 7 series of processors launched on September 27, almost a full month before Intel launched its 8th-generation processors. Letting AMD have a month to itself wasn’t great for Intel, but we must consider pricing when making these assessments.

So far, AMD has announced four different processors for the midrange and high-end:

The pricing structure of the Ryzen 7 series is an improvement over the Ryzen 5 series but still doesn’t offer anything for buyers wanting a little cheaper. The 3D V-Cache feature isn’t available for the Ryzen 7 7000 yet, but AMD has confirmed that it will be at CES 2023 in January. Hopefully we’ll hear something about cheaper or V-Cache-equipped Ryzen 7 7000 CPUs at AMD’s CES 2023 presentation in January.

The 13th-generation Intel Core processors, originally expected to be more expensive than the 12th-generation Alder Lake chips. Raising prices every generation is something Intel has done since 2017 and since Raptor Lake features many more cores than Alder Lake (thus increasing manufacturing costs), another round of price increases seemed likely.

Thankfully, most of us were wrong, and 13th-gen CPUs basically share the same pricing structure as 12th-gen CPUs. Intel, like AMD, has only launched its midrange to high-end CPUs, but we expect new models to come later.

The new Zen 4 architecture with AMD’s Ryzen 7 processors. The biggest upgrades are 1MB of extra L2 cache per core, new AI instructions, and the use of TSMC’s new, enhanced 5nm node. Thanks to all those improvements plus several smaller changes, Ryzen 7 promises a 13% boost in instructions per clock (or IPC) and a massive clock speed boost, from 4.9GHz on the top Ryzen 7 1800X to 5.7GHz on the top Zen 4 CPU.

The Zen 4 core itself, as well as its IO die, feature an RDNA2 iGPU, bringing graphics to chiplet Ryzen CPUs for the first time. However, these graphics aren’t designed for gaming and are really aimed at PC users who don’t want discrete graphics (like business PCs). Ryzen 7000 supports DDR5 memory and PCIe 5.0 for both graphics and storage

Intel’s new 28-core, 32-thread processor is based on the company’s Alder Lake architecture and has been updated with three key improvements: higher-clocked cores, more cores, and more cache. This has all been done without using a new process or architecture like AMD; Intel is still sticking with its Intel 7 process (also known as 10nm) and the same E-cores we saw in Alder Lake. The P-cores have been updated with the new Raptor Cove microarchitecture, however.

When it comes to clock speed, the Core i9-13900K’s P-cores can hit 5.8GHz out of the box, which is 600MHz more than the 12900K was capable of and 100MHz higher than what the 7950X is rated for. The E-cores, on the other hand, get a smaller boost of 400MHz, which is still pretty decent. This extra clock speed isn’t free, though, as it requires significantly more power.

Buying your PC or building your PC can be a strenuous, tedious and a time-consuming endeavour with endless variables playing a part.

Kryptronix – Best Prebuild PC dealers in Delhi are here just for you.

Now get the best prebuild PC for all your needs such as work, home, designing or gaming with ease and comfort of your with Kryptronix.